Ambalavattam Temple Tellicherry has origins stretching back to eighteenth century.  The ancestors of Ambalavattam family settled in Thalassery way back in 1775.  They installed the original deity of Durga Devi in one of the rooms of Ambalavattam tharavad house.

In early 1900s, the family decided to shift the shrine to a separate temple building in the forecourt of the tharavad house. People in the neighbourhood could also worship Durga Devi and partake in the festivals.

The family resolved, after consulting a panel of eminent priests of Kerala in 1997, to relocate the temple to a new location. It is separate from the main house and has a direct entrance for the general public. A large gathering of family elders, other family members and general public was present at the Punapratishta in March 2004.

As the work involved in running the temple became more intricate, the family decided to form a trust called Ambalavattam Temple Trust which now manages affairs of the temple complex. The trust solely comprises of members of the family. It is registered under the Income Tax Act 1961.

We celebrate Pratishta Dinam on 28 March every year. There are special pooja from early morning till 8;00 pm.  At noon, children and others in the neighbourhood as well as family members partake in an annadhanam.  Cooks prepare the vegetarian lunch in the temple compound. People from all walks of life participate. There is no consideration of caste, creed or religion.

A get-together of family members is also organised on the same day at 11:00 a.m. when  suggestions are sought regarding running of the temple. 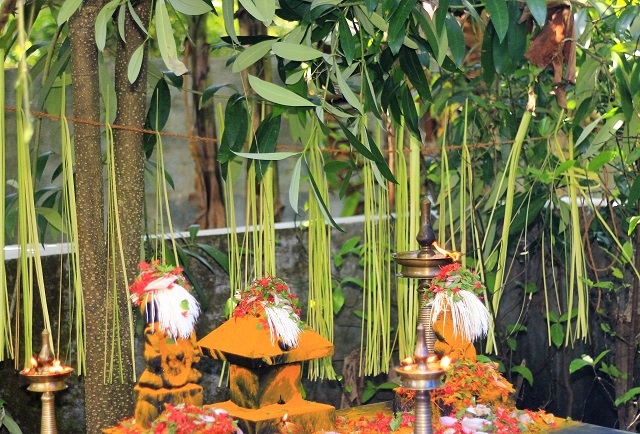 In August or September each year, Naga Pratista Dinam comes about . The pooja ceremonies take place on Ayilyam nakshatram in the Malayalam month of Chingam. Noorum Palum and Sarpa Bali are the poojas which are preformed. The poojas ward off Sarpa Dosham and Rahu Dosham.

Navaratri, as is customary, is observed over nine nights. Navratri celebrates the victory of Goddess Durga over Mahishasura, the buffalo-headed demon. She fought for nine days and nine nights before rising victorious on the tenth day.

Navaratri devotes three days each towards worship of the divine forms of Devi: Durga, Lakshmi and Saraswati. The tenth day is Vijayadashami, the day of victory.

Family members have made increasingly liberal donations to Ambalavattam Temple Trust. Costs have steadily gone up over the years. At the same time, bank deposits have shown a trend of continuously  declining returns. All family members who made generous contributions  deserve sincere thanks.