Pratishta Dinam 2022 had to face unexpected hurdles because trade unions had announced a two-day bandh on 28 and 29 March 2022. Private vehicles mostly did not come out on the roads. Trains ran as usual. But buses did not ply. Although the Covid 19 outlook was not threatening, family members were not able to attend the celebrations of Pratishta Dinam 2022.

The situation was comparatively better last year during Pratishta Dinam. Travel was relatively easier. Government had allowed opening of temples and other places of worship. Large gatherings of people were still restricted. Masks and social distancing were mandatory. Under the circumtances, we had gone ahead ahead with the celebrations of Pratishta Dinam while adhering to Covid 19 norms.

Over the course of the next one year, the Covid pandemic had gradually become less threatening. We were hopeful that we will get back to normalcy in March. But things did not work out as per expectations due to the strike.

On 27 March, the temple was well decorated with flowers and lights. Bhagavathy Seva and Deeparadhana were witnessed by relatives and well wishers. 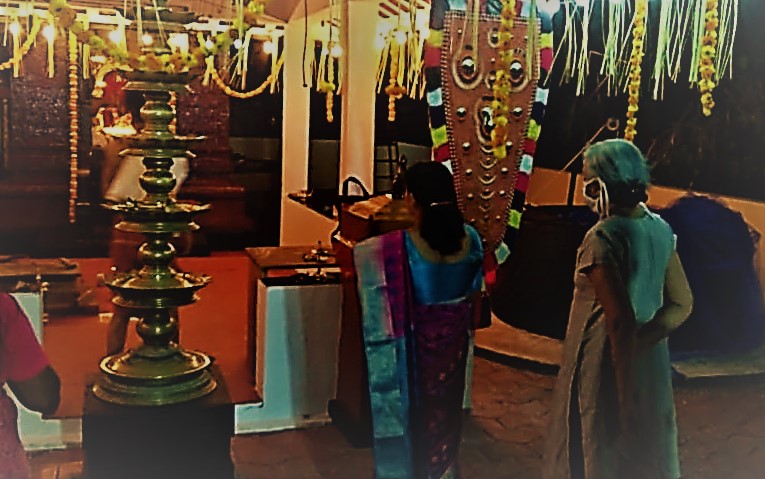 Moderation of Celebrations for Pratishta Dinam 2022

Annadanam was not part of Pratishta Dinam 2022, like in the previous year. The bandh resulted in a sharp reduction in  the number of family members who could participate. We therefore left out Annadanam this time too. Thayambaka was also excluded.

The agenda on Pratishta Dinam 2022 was as follows:

Early in the morning, floral decorations of the previous day were discarded. Abhishekam of the deities then took place, making use of the sacred water from temple well. After Abhishekam at 6:00 AM, poojari adorned the deity with flower garlands. This is known as the poochaarthal. We later observed Ganapathy Homam.

The first pooja, Usha Pooja, was at 7.30 AM. After this, the tanthri took out the decorations on the idols and conducted  Kalashaabhishekam with sanctified water. Navaka pooja was next. The second Abhishekam and Navaka pooja are performed only on special auspicious days. The following pooja was Uchha pooja at 10:00 AM. Maha Naivedyam was distrbuted.

The annual family meeting could not be held this year due to the trade union bandh. Most family members had to abandon their plans to visit the temple on Pratishta Dinam 2022.

The pooja schedule for the evening of 28 March was as follows:

The trustees did a remarkable job in organising the function in spite of obstacles. Among the trustees, Shubha Platt and A.K. Umnanath travelled to Thalassery on Pratishta Dinam 2022. Family members who visited the temple deserve a round of applause.

An unknown photographer has provided the photos and videos. I have done a few edits on the photos. The two videos are embedded from YouTube.